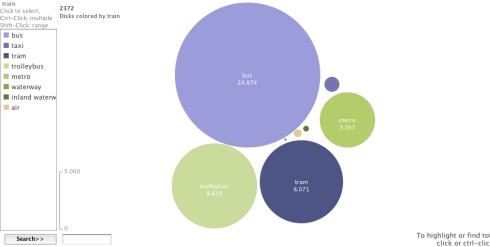 This morning for the first time I started using an online visualization software "Many Eyes" where you can upload your own data and create visualizations in different formats.

Echo of Moscow under attack from Kremlin?

A few days ago Aleksei Venediktov, the editor-in-chief of the Radio Station Echo of Moscow, which is often considered the last hope for a free press in Russia, was asked by Gazprom Media Holding (66% of the shares) to resign from the Board of Directors of the Radio Station. His Vice President Vladimir Varfolomeev and 2 independent directors Yasin and Makovsky have already stepped down. One has to mention that it happened less than a month before the Russian Presidential Elections. So what is it? A simply change in the Board of Directors or a political decision from those in power? Has it something to do with protests for ” Fair Elections” across Russia? There is definitely something fishy about Venediktov’s early resignation from the Board.

Venediktov, during his interview on Echo on the same day, assured the worried listeners that the company’s policy and staff would stay the same. For a Russian citizen living abroad since 7 years, like me, Echo of Moscow always remained the only  trustworthy provider of the factual and unbiased information about my country. It is one of the few critical voice that one can still listen to and read in Russia. Now the question is how long will the Radio exist? Will it end up like TV6 or NTV? Who knows…let us just wait and see.

I badly needed these holidays after my first  and probably the hardest semester at Deutsche Welle to finally start using my  media research lab.

Leave a comment   |  tags: media, research | posted in Worth reading